Protest and politics at the Santiago geography conference

During the closing ceremony of the 2011 International Geographical Union (IGU) regional meeting in Santiago, Chile, two students discretely entered and distributed small flyers alerting attendees to the conference venue’s history of torture during the regime of Pinochet (see images below).  They were gently escorted out by military officers in white dress uniforms.  After a few more platitudinous speeches by the conference luminaries, the students came back, this time with a paper banner that a military officer succeeded in ripping apart.  As they were again guided out, one shouted words that were obviously not translated by the interpreters in their booth.  The speeches resumed as if nothing had happened. 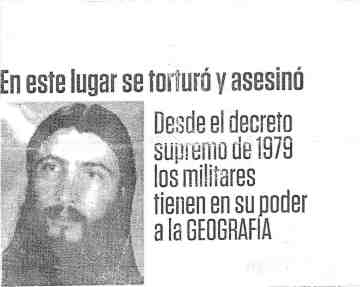 TORTURED AND ASSASSINATED IN THIS LOCATION

Since the supreme decree of 1979, the military has had power over geography.[this, I believe, refers to the fact that Pinochet in 1979 declared the Military Geographic Institute to be the official representative of Chilean geography to the IGU – see Hirt & Palomino-Schalscha 2011]

In memory of those who were disappeared, tortured and exiled by the military dictatorship.  For Freddy Taberna (disappeared); Eusebio Flores, Graciela Uribe, and Pedro Cunil (exiled from Chile for thinking of a different geography).

And because all is not lost, teacher Gladys Armijo [this last line refers to the late Prof. Gladys Armijo (1940-2008), in whose honour a series of seminars on critical geography have been held in Santiago

The conference was hosted by the Military Geographic Institute (IGM), and took place at the campus of the Military Academy of Chile.  It was very professionally run – indeed with military precision, no presentation went so much as 60 seconds over time [see photos on IGU website].  According to IGU President Ron Abler, some 850 people attended from 60 countries, with over 30 percent from Latin America, a constituency from which the IGU has been keen to encourage more participation.

The decision to allow IGM to host a conference in Santiago was made 7 years ago by the IGU.  Earlier this year, however, a petition was circulated internationally asking that the conference venue be changed.  Clearly this was a bit late in the game; the effect instead was that a number of people did not attend.  The prime complaint was that the location (the Escuela Militar), the host (the IGM), and the military in general were still associated with the regime of Augusto Pinochet from 1973-1990, associated with violence, widespread torture, and some 3000 disappearances of political enemies.  Indeed, Pinochet taught geography at the Military Academic himself.  (See the excellent editorial [Spanish version here] in the journal Political Geography by Irene Hirt and Marcela Palomino-Schalscha). 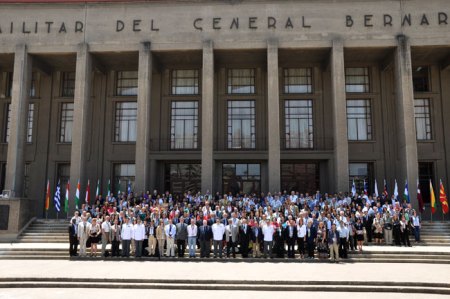 I had decided to attend out of interest in the conference location (Chile is indeed stunning), rationalizing that the Military Academy existed long before Pinochet and long afterwards, that the identity of the hosts or local organising committee had never really mattered in any conference I had attended, and naively assuming that Chile had come to terms with its history, and that that conference could serve as a means to engage with and move beyond the history.  How wrong.  In my superficial reading, Chile is still quite strongly split between right-wing fans (and apologists) of Pinochet – the military being firmly in this camp, and probably many businesses, given his role in economic growth and liberalization – and left-wing activists.  Pinochet’s portrait still hangs in the second floor lobby of the Military Academy’s main building, along with other Commanders-in-Chief of the Chilean Army, and the label makes no mention of controversy, noting instead his Presidency (without remarking that it followed a coup d’état) and the fact that his remains were exhibited and the funeral held on these very grounds.

In addition, most attendees did not know that the gala dinner venue – the posh Club Militar Lo Curro – had been used by Pinochet as one of his residences.  I just learned this by chance from our fieldtrip guide as I was heading for dinner elsewhere.  Indeed, there was no indication at all that, as Hirt & Palomino-Schalscha suggested, the conference could “represent an opportunity to acknowledge these legacies, as has been done with other conference sites bearing imperial and military links” (2011, p355).  The history, site, memory, and associations of the place were not discussed (not even gently and obliquely, as they might have been in an opening ceremony, or directly in a panel session), and the high security suggested that they were not welcome to be discussed.

It seems a missed opportunity.  Clearly, almost any conference venue has some ghosts in the closet, so one might just give up and always stay at home.  Yet this was a particularly egregious ghost as well as a superb chance for some critical engagements.  To admit errors of the past, even if one was not directly involved, requires a lot of courage.  I think many of us would have found our hosts – gracious, kind, fun, and professional in many ways – much more impressive if there was some hint, some glimmer, some indication that the past was not just swept under the rug just like the protesters were quietly escorted out of the room.

This entry was posted on Thursday, December 1st, 2011 at 8:45 pm and is filed under Uncategorized. You can follow any responses to this entry through the RSS 2.0 feed. You can leave a response, or trackback from your own site.

4 Responses to Protest and politics at the Santiago geography conference