Invasion biology has been a remarkably active branch of the life sciences in the past two decades.  My itinerary first crossed this field when I noticed, at the time of my move to Melbourne, that the ‘precious’ mimosas (acacias, wattles) of the Madagascar highlands were called ‘green cancer’ in South Africa, and in both cases were introduced from Australia.  It was quite surprising to discover that this shrubby tree, so appreciated by Malagasy farmers (as a resource) and environmental managers (as ‘regreening’ barren lands), was seen so negatively across the Mozambique Channel.  This observation led to a research program that (1) opened a window for me to learn about and consider the field of invasion biology, and (2), serendipitously, to collaboration with ecologist Jacques Tassin at the French research institute Cirad.  I comment on some of the recent fruits of both in this blog.

The South African approach to alien plants. Cartoon from environmental education material collected in 2006 (thanks to Rémy Kinna).

In a just-published viewpoint in the journal Land Use Policy [free official pdf until Oct. 6;  pdf; link], Jacques and I argue that researchers and policy makers should give up a Manichean approach to biological invasions and biosecurity.  While plants and animals, often transported by humans, can certainly at times spread quickly and impact landscape utility, aesthetics, or functioning, this can be both good and bad.  We make three points.  (1) Invasions are not just biological, they are also fundamentally cultural. Human activities – both the transport of species and the ways in which we make landscapes susceptible to invasion – as well as our judgements, perceptions, interpretations and emotions are inextricable from the concept of biological invasion.  (2) Invasions are not restricted to negative impacts. For instance, in some cases, for instance, native species can benefit from protection or increased resources granted by the presence of invaders.  (3) Invasions may be a type of major global change, but they can also help ecosystems and humans adapt to these very changes.  For instance, they can maintain ecosystem processes such as productivity, carbon storage, or nutrient cycling in conditions of climate change or land cover transformations.  Invasive plants or animals are functional, structural, and compositional parts of the Earth’s transformed and transforming ecosystems.  So, in the words of Hamlet, “there is nothing either good nor bad, but thinking makes it so”.

Jacques’ recent book, La Grande Invasion (Paris, Odile Jacob, 2014) takes these arguments further, reviewing a much broader set of philosophical, biological, ethical, and practical questions raised by invasion biology and the boom in concern over alien invasives.  He presents an insider’s critique of invasion biology and develops another vision for ecology and conservation.  He opens by asking “who is afraid of invasive species, and who is afraid to think about them?” stating that he wishes to explore a middle path between a pessimistic position that consider only wild nature as worthy of admiration, and an optimistic position that naively assumes nature will accommodate humanity’s errors and inaction.  The book is rich in examples from around the world. In the next three paragraphs I describe the book’s argument in detail, as an English translation is not otherwise available.

*See interviews with Jacques in the newspaper SudOuest: “Toute espèce invasive a nécessairement in intérêt écologique“, or in Le Monde: “Qui a peur des espèces invasives?”

Jacques book begins by reviewing just how much humans, as Homo disseminator, have moved species (Chap 1). It then shows how invasion biology developed not from any particular scientific breakthrough, but from a particular environmental ethic centered on integrity, stability, and beauty. This is illustrated by competing definitions for ‘invasive species’.  For scientists of a biogeographic persuasion, when species go beyond their ‘legitimate’ ranges and reproduce abundantly, the rules of the game are broken.  Tassin contrasts this origin-based definition with that of scientists of a conservationist persuasion, whose definitions focus on impact, such as threats to indigenous biodiversity, and with those that are more scientifically neutral and focus only on behaviour (Chap 2).  He then delves deeper into the philosophical and value-based roots of thinking about invasions, from the romanticization of primitive life, to the myth of organic nature, to the temptations of bioxenophobia, to the role of metaphors (Chap 3).

Tassin reviews the evidence of invasions, and whether life itself is becoming McDonaldized or homogenised.  He states that ecosystems are often more adaptive than we think, giving many examples of invasion effects and reminding us to look at both positive and negative effects, and to pay attention to the duration of the effects (Chap 4).  He puts humans at the root of biological invasions: they occur in the wake of our activities (Chap 5).  He argues that invasive species “are symptoms of other, more worrying, changes that we are reluctant to face, like pollution. So we need to consider them as symptoms of something bigger which requires investigation, not just simply symptoms that should be destroyed” (p104).  Furthermore, “It is absurd to ostracise invasive species when we know that the deep reasons for their emergence are very often linked to humanity.  Invasive species are our new commensals.  They figured out how to benefit from humans, and by inserting themselves into our life-environment, have become one of its most vibrant signatures.” (p122).  Biological invasions teach us a number of things about biology (Chap 6): ecosystems are rarely saturated in species; species evolve quicker than we thought; ecosystems can be recomposed of exotics.

Tassin notes how ecology (as a discipline) has sometimes struggled to move into this dynamic, anthropogenic world, away from its human-free, deterministic, and equilibrium oriented models. In his view, “The massive proliferations which biological invasions represent can be seen not as symptoms of some disequilibrium, but as the provision of new resources” (p151). He argues that conservation biology should not be about conserving the past or protecting species, but about preserving its evolutionary potential, building the capacity for change, protecting biological processes, and (re)conciliating ourselves with all of biological life (Chap 7).  The final section, an “ode to perpetual movement” (Chap 8), builds a case that “exotic species, including those we determine to be invasive, are a part of the evolutionary potential that manifests in all places.  These species testify to an undeniable adaptive power, which they have all demonstrated in inserting themselves into totally strange environments.  As a result, whether we want it or not, they are a richness for tomorrow” (p180).  But, this is “not to promote free reign…  We should accompany this resilience, not abandon it to itself.  Resilience can’t operate unless” we make the effort to stop radically perturbing our environment (p172-173).  Tassin concludes that biological invasions are fortuitous as well as sometimes – in the short term – destructive.  The ‘grand invasion’ demands our attention when destructive.  But it also beneficial, it that it can get us to renew our views of nature. “Our future rests on a new alliance with the living world.  Including with those species we call invasive” (p182).

A key point – in both Jacques’ book and in our Land Use Policy article mentioned earlier – is the importance of how we talk about the phenomenon of ‘invasive aliens’, ‘weeds’, or ‘species redistributions’. Each of these labels itself tells a story, each signals values: the former has warlike, fear-mongering undertones, the second brings to mind the perspectives of farmers and gardeners, the third sounds more technical. In an earlier piece on ‘metaphors’ in the journal Natures, Sciences, Sociétés (link pdf), we review how military, health, nationalistic, and cultural metaphors convey particular messages to the public. We propose alternative, more positive metaphors to supplement the currently dominant negative ones.  The pool of possibilities is immense: to loosely translate the list that Jacques put together (p. 412 of the article, p. 75 of his book), they include:

Torn from their lived context in the landscape onto global lists of known invaders, non-native plants become ‘others’, separate from ‘us’, and judged because of that difference.  Like in Orientalism or Tropicalism, non-natives are exotic, different, but freighted with the moral judgements of superior civilisations. They are exuberant (good) and fecund (bad).

Too often, ‘invasives’ get confused with ‘aliens’ and ‘weeds’.  While a plant can be all three of these, we should not confuse origin (aliens), behaviour (invasive), and judgement (weed). Many definitions of invasives muddle all three of these things.

As far as origins, the strict dualism separating native and non-native species is conceptually problematic and difficult or unproductive to implement in practice.  As Jacques and I note in the journal Conservation Biology [in an in-press piece entitled ‘A melting pot world of species’ (pdf) written in response to Speziale et al.’s problematic ‘Recovering native culture in a world of non-native species’ (link)], “it is worth repeating the important points that nativeness is spatially and temporally relative, that non-nativeness is not a synonym for invasiveness, and that non-native species can contribute to ecological functions as much as natives.”

As far as behaviour, this, in my opinions, is the most defensible aspect of invasions.  Jacques’ book quotes Loïc Valéry, who defines invasion as “species’ acquiring a competitive advantage following the disappearance of natural obstacles to its proliferation, which allows it to spread rapidly and to conquer novel areas within recipient ecosystems in which it becomes a dominant population” (Valéry et al. 2008 Biol. Inv. 10, p. 1349).  But one must be careful – as Jacques’ book argues – not to separate this behaviour from the human actions (land use, pollution, climate change, as well as transport) that lie hidden and unexplored behind the phrase ‘disappearance of natural obstacles’.

As far as judgement, people will of course always judge plants and animals and their impacts.  Opinions, thinking, and judgement are part of being human.  But all too often, judgements of invasion have been one-sided, blinded by concerns over nativism, or wedded to a single perspective.  As Jacques notes in his book, invasions tell us much about humans and our impact on the planet, but also about the adaptive potential and resilience in the diversity of life.

To finish, a children’s point of view.  Walking in Werribee Gorge (west of Melbourne) a while ago, my son and I happened upon a dead fox.  Poisoned, no doubt, for being feral. How to explain to a child – wondrous of all of nature – that this fox had to die?  It wasn’t the fox’s fault that it was born in the ‘wrong’ country and successful in making a life there.  In many cases, it isn’t the plant or animals fault that it is invasive.  It is the actions and judgements of humans that are the problem.  The children’s book Barbapapa sur Mars (2005, by Annette Tison and Talus Taylor) wonderfully incorporates this perspective (see images).  In it, a bean plant from Earth becomes dangerously invasive on Mars, but the fault is human (well, it is Barbidur’s fault).  So, at the end, his sister Barbabelle is told not to take any of the fantastic, food- and music-creating Martian poumpoumplantes back to Earth.  Of course, Barbabelle is just doing as people have done for millennia – assisting plants and animals to overcome biogeographic barriers, in order to enrich our lives. 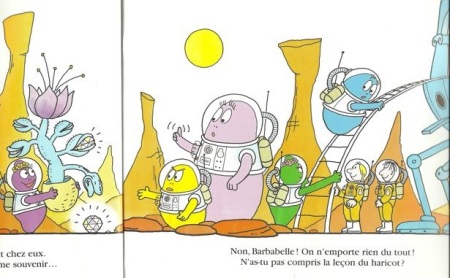 Barbabelle learns the lesson of the giant bean: no she can’t take a ‘poumpoumplant’ back to Earth

This entry was posted on Tuesday, September 9th, 2014 at 12:47 pm and is filed under Acacia, Book Review, Introduced and Invasive Plants. You can follow any responses to this entry through the RSS 2.0 feed. You can leave a response, or trackback from your own site.

2 Responses to Reflections on invasion biology