People and the dispersal of baobabs around the Indian Ocean

The baobab, that iconic, majestic, and grotesquely massive roots-in-the-sky tree, teaches us something surprising about “nature”.  It demonstrates that what appears to be “natural” has been – for millennia and millennia – also fundamentally “social”, for people have been important dispersal agents of these trees.  Researchers like Chris Duvall and Jean-Michel Leong Pock Tsy have shown this for the African baobabs.[1,2]  Our recently completed research project, led by Priya Rangan, demonstrates this in multiple ways around the Indian Ocean.  Baobabs are such useful and remarkable trees [3], it is hardly difficult to imagine people not picking up the hard but pleasantly light and fuzzy fruit pods and walking with them. 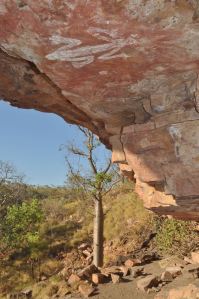 One part of our project looked at the single species of baobabs found in Australia: Adansonia gregorii, called boab. It grows in the Kimberley region in the northwestern part of the continent.  In a study just published in PLoS ONE [4], we combine evidence from baobab genetics [5] and Australian Aboriginal languages to show that humans have been the primary agents of baobab dispersal.  In particular, we reveal their crucial role in dispersing baobabs inland from now-submerged areas of northwest Australia during the dramatic sea-level rises at the end of the last glaciation.  (See also this article in The Conversation as well as  Priya’s blog about the study)

A further question is how the baobabs arrived in Australia in the first place.  Oceanic dispersal via seed pods floating in currents, several million years ago, remains the most plausible explanation, as our collaborator David Baum has shown [6].  Yet, another one of our baobab collaborators (and veritable Renaissance man) Jack Pettigrew advances an interesting speculative argument about a possible human role in transporting the baobabs, building on evidence from rock art in the Kimberley and in Tanzania [7].  Karen Bell, who worked as a post-doc on our project, in 2012 helped Jack demonstrate that upland baobabs in eastern and southern Africa were actually a different species from the pan-African baobab Adansonia digitata.  They named it Adansonia kilima [8].

Another part of our project investigates the dispersal of African baobabs to other parts of the Indian Ocean.  Adansonia digitata grows (or grew) in diverse places around peninsular Arabia, coastal Iran, Pakistan, India and Sri Lanka [3], as well as near old settlement sites on the northwest coast of Madagascar (a country with its own six species of baobab).  It is often stated that “Arab traders” brought baobabs to these places.  Yet this incomplete and misleading, as Priya and Karen show in their study of baobabs in India [9, 10], where the tree is found in several widely dispersed regions. They piece together evidence from molecular genetics of baobab trees, ethnographic observations of rituals and language, and archival and historical sources.  They confirm that baobabs have indeed been introduced to India, but that the introductions are multiple, from different sources in Africa, and possibly quite ancient (several 1000s of years), and likely involved African sailors, migrants, merchants, soldiers, and slaves (see this beautiful article in The Conversation).

More “recent” networks of exchange continue to move baobabs from place to place.  European colonialism led to the introduction of the tree to other Indian Ocean islands, like Reunion and Mauritius, and places further afield like Malaysia or the Caribbean.  I brought some seeds to Fiji, where a friend successfully germinated them but then destroyed them given the lack of formal approval…

Hopefully, this post explains why I was on a field excursion across Mozambique and Tanzania back in 2011 (see blog entry). Priya Rangan and I were exploring the baobabs of the region, funded by an ARC research grant called “The Enigma of Arrival”.  The upside-down trees – bottle trees – baobabs continue to inspire!

This entry was posted on Thursday, April 2nd, 2015 at 11:59 pm and is filed under Environmental History, Introduced and Invasive Plants, Research. You can follow any responses to this entry through the RSS 2.0 feed. You can leave a response, or trackback from your own site.