The fires in Portugal’s neo-Australian landscapes

The terrifying and sad images emerging from last Saturday’s fires in central Portugal struck me in their similarity to the 2009 Black Saturday fires around Melbourne where I used to live.  But the similarity is more than the day of the week, the record-high numbers of fatalities, the images of charred cars trapped along the road, and the human tragedy.  The other similarity is the vegetation: a fairly impressive portion of Portugal is covered by “neo-Australian” landscapes of introduced eucalyptus trees, as well as acacias and hakea.

A quick and dirty look at the extent of the fire in comparison shows clearly that the fires spread largely in eucalyptus forests: 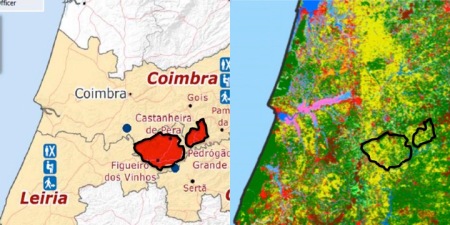 Eucalyptus trees, as well as other elements of Australia’s vegetation, are of course highly fire adapted.  Native Iberian cork oaks and pines are of course also no strangers to fire, but the question that has increasingly been raised in the press is to what extent eucalypts are to blame in the recent tragedy (in English, see articles for instance in Politico, LA Times, NYTimes).

More pertinently, it seems to me, attention is also drawn, in some of the more detailed press analyses, to the wholesale changes that the Portuguese landscape has undergone in the post-WWII period.  The eucalypt is just the biological symbol of massive social and economic transformations.  Seventy years ago, the hills were grassy or scrubby, with scattered stands of oak or pine and occasional exotic plantations. Hills were widely used for grazing sheep and goats, harvesting firewood for household use, and to complement farming. Especially from the 1950s onwards, the government established large-scale forest plantations – particularly of maritime pine – on the hills, and supported the establishment of a pulp and paper industry. While some local entrepreneurs benefited, small farmers were marginalised. As Portugal integrated more and more into the European labour market, the economy grew, with major outmigration to urban areas and other countries. These forces pushed land abandonment and depopulation in rural areas, with plantation forests replacing marginal pasture and farmland. Land managers, whether private, or municipalities outsourcing their common lands to official forest services, increasingly turned towards eucalyptus plantations (often with acacias appearing in the understory or after fires). More recently, more and more questions have been raised about these omni-present neo-Australian landscapes – with eucalypts covering 7% of the country! [*]

So, without these dramatic landscape changes, would the fires have occurred, and would they have burned so intensely and dangerously?  In heatwaves such as the one Portugal experienced, any landscape can burn, but densely forested eucalyptus plantations provide a level of danger that sheep pastures do not.  Inevitably, political attention will turn to short-term debates and recriminations over responsibility for damages and deaths, disaster management plans, fire-fighting strategies, and public awareness.  But clearly, it is also worth thinking bigger and longer term about how and why landscapes change and the impacts of decisions made along the way.

[*] Key sources for the Portugal land change story (which is summarised from an article I’m working on):

Black, R. (1990) Regional political ecology in theory and practice: a case study from northern Portugal. Transactions of the Institute of British Geographers 15, 35-47.

This entry was posted on Thursday, June 22nd, 2017 at 5:49 pm and is filed under Fire, Introduced and Invasive Plants. You can follow any responses to this entry through the RSS 2.0 feed. You can leave a response, or trackback from your own site.

One Response to The fires in Portugal’s neo-Australian landscapes