When invasion ecology looks at cities and urban areas 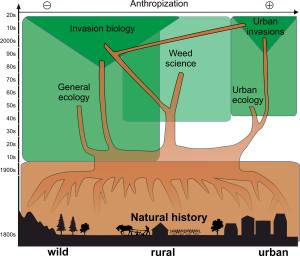 The study of invasive plants and animals has started to pay attention to cities.  In a paper just out, written by my colleague Joëlle Salomon Cavin and me, we document this ‘urban turn’ and ask what its implications are.  Specifically, our paper does a few things. We review how the ecological sciences in general have long had blinders as far as matters urban go, but also the existence of alternative paradigms – notably in 20th century European circles and in diverse ‘urban ecology’ traditions. Then, we look in more detail at how invasion biology has dealt with (or ignored) cities. In doing so, we END_OF_DOCUMENT_TOKEN_TO_BE_REPLACED