Parents learn can learn a lot about an education system from the vocabulary their children bring home.  Since our arrival in the canton of Vaud, Switzerland, the results are telling.  The words bouncing around the living room are “test, oublie, revision, bavardage, arrivée tardive, heure de retenue, heure d’arrêt, redoubler…”  These are all words about discipline or performance.  Previously, in very different school systems, the words were more along the lines of “my project, the school concert, assembly, homework“.  What does this show?

In Fiji and Australia, our kids’ schools (private and public, respectively) posted their values in colour on the walls, and reminded students of these values in the speeches at assembly:  their mission was to create learners who are “inquirers, thinkers, communicators, courageous, knowledgeable, principled, caring, open-minded, balanced, reflective, and visionary“. The Swiss schools are as discrete about their mission as Swiss banks are about their clients. The school website mentions developing the competencies of each student, and includes links to the cantonal law which says in Ch. 2, Article 5.1 that the goal of school is the “instruction” of the students.  In attending a number of informational meetings in the past month with teachers and the school director, the read-between-the-lines values are quite clear:  discipline and mastery – with the bar set quite high for both.

Values front and centre on website of our Australian public school: integrity, responsibility, respect, harmony, and love of learning. 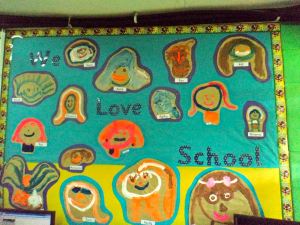 In Fiji and Australia, the teachers and principals set the tone through frequent assemblies and speeches, speaking with pride of the school, its mission of inspiring learning, celebrating particular achievements of individual students and classes, and investing in creating a school community feel.

In contrast, in our kids’ current Swiss schools, tone-setting is largely absent.  There is barely even a sign announcing the name of one of the schools, the other has none! (See photo gallery at end of post). This isn’t cultural – our commune (municipality) and my university both succeed in setting a community feel, cultivating pride, and celebrating success at public events. Perhaps it is just the town we’ve settled in. But in conversation with other people, this situation seems widespread.  And the message of the implicit values of discipline and mastery has been quite consistent in every one of our interactions with the school.  Here are three examples.

That particular meeting was perhaps the low point for us.  It was also our first meeting with our elder son’s homeroom teacher, whose personality grates.  Since then, we’ve met with teachers individually (by appointments requested formally through the student agenda, following the protocol…) and we’re slowly learning to play with the system. The school has also offered a few weeks of individual support classes to my elder son, given his weaknesses in written French, and we’re very thankful for that.

As far as the emphasis on mastery, compare the grading scales used in different countries.  The Swiss system (like the French) accords about half its grades to failing marks that are insufficient to pass.  The Australian and American systems have just one grade of fail.

But what is the effect of this education system?  It isn’t a surprise that my older son, in particular, doesn’t like school.  It isn’t a surprise that the traits of the Swiss national character include adjectives like conscientious, tradition-bound, rule-bound, perfectionist, precision, punctuality… Swiss kids are “disciplined” in the full Foucauldian sense of the term (Discipline and Punish).  Indeed, at my university, I get the sense that the students are… disciplined, master what they are supposed to learn quite well, but lack much outside-the-box thinking.

A great book critiquing the French education system is Peter Gumble’s On achève bien les écoliers (the English version is called They shoot school kids, don’t they?). It argues that the French system (which is particular in its own way – very meritocratic, centralised, abstract, and academic) could stand to learn a lot from other approaches, such as the Finnish. I haven’t seen an equivalent book yet for Switzerland, but many similar critiques would apply.  There are plenty of TED talks about different forms of education and the importance of encouraging grit or creativity.  Each system, of course, has its strengths and weaknesses and the ideal is perhaps somewhere in the middle.

I close with a photo gallery of school signs, ranging from old-fashioned to welcoming to an afterthought (the latter here in Switzerland).  The fourth is my favourite school slogan ever, from a rather disadvantaged school in rural South Africa close to my heart.  “We like what we do”, it says.  I wish that a little of that spirit would rub off on the schools here!

A small afterthought on one of my boy’s schools in Switzerland: a sign! The other boy’s school has no sign.

“We like what we do”, the slogan of Muchuchi Primary School in Bushbuckridge, South Africa

This entry was posted on Tuesday, November 24th, 2015 at 8:52 am and is filed under Schools, Teaching. You can follow any responses to this entry through the RSS 2.0 feed. You can leave a response, or trackback from your own site.

11 Responses to Discipline and mastery: impressions of Swiss school system