Farmer livelihood practices and the forest transition in Africa

In what situations do the practices of small-scale family farmers lead to increased tree cover, particularly on a continent better known for land degradation and deforestation?  Research on the “forest transition”, a pattern where net deforestation is replaced by a net gain in forest cover, has so far avoided much mention of Africa.  In contrast, it is historically documented in western Europe, eastern North America, east Asia, and seemingly underway in parts of Latin America and Southeast Asia.  This research tends to focus on factors such as economic modernisation, rural abandonment, urbanisation, or even globalisation as driving forces of the forest transition.  Two recent studies I contributed to focus instead on Africa – one in West Africa, one in Madagascar – and on transitions brought about by rural farmers.

The studies are quite different.  One is a social evaluation of a development project; the other a remote-sensing based study. One deals with protecting the regeneration of native trees; the other deals with the planting and expansion of exotic species.  But in both cases, rural farmers and their livelihoods are front and center.  African smallholders have traditionally, in certain regions, retained beneficial trees within or around their fields, and are now experimenting with the incorporation of other woody species into their production systems, often in collaboration with government and NGO efforts.

The first study (Weston et al. 2015) focuses on a “Farmer-managed natural regeneration” (FMNR, or Régénération naturelle assistée—RNA—in French) project in Ghana.   The project was undertaken by the NGO World Vision in nine villages of Talensi district in the Upper East Region of the country.  The project promoted FMNR techniques, in which farmers to preserve and encourage regrowth from re-sprouting trees found in their fields. They select the strongest, straightest stems, controlling for species type, spacing, and vigour.  The project also promoted community managed forests, fruit tree plantings, and a diversity of agronomic, agroforestry, and general development interventions.  Comparing households involved in the project, near to the project, or uninvolved in the project allowed us to demonstrate that the benefits of the project extended far beyond simple economic indicators (income, agricultural yield), to things such as improved health, psycho-social wellbeing, soil fertility, and wild resources.

The second study (McConnell et al. 2015) investigates the dynamics of tree cover in highland Madagascar, a place where farmers have incorporated eucalypts, pines, and wattles (acacias) into their farming landscapes over the past century.  I had previously documented the expansion of this exotic tree cover during the twentieth century using historical landscape photos and air photos; here we use state-of-the-art land change science techniques to investigate tree cover ‘dynamics’ from 1994 to 2014.  Dynamics is certainly the right word – while the new forests continue to expand cover overall, they are heavily used (as wood lots, charcoal resources, construction supplies, bank accounts, and more) and the image analysis demonstrates complex patterns of growth and harvesting. 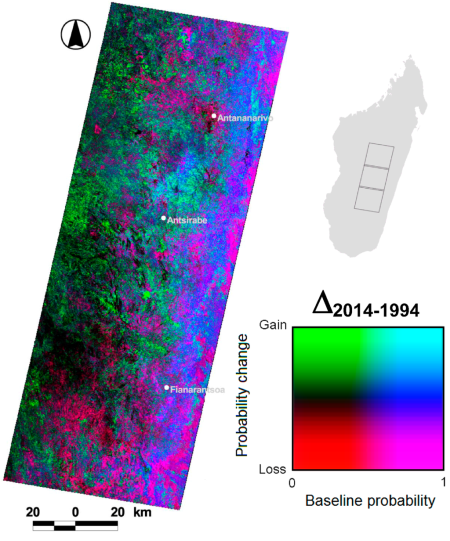 Figure 2 from the McConnell et al. (2015) article in LAND. Temporal dynamics of woody cover in the study area over a 20-year period (1994–2014). Green is new tree cover in previous grassland area; red is less tree cover in previous largely grassy areas; light blue is more tree cover in already tree dominated areas; magenta is deforestation (visibly in the escarpment to the east).

Both studies result from fruitful and interesting collaborations, the first with Peter Weston (who transformed his work with the NGO World Vision into a masters thesis at Monash University under my supervision, and then into this article) as well as with Bill McConnell (a fellow traveller in the world of Madagascar’s environmental transformations).

This entry was posted on Saturday, December 19th, 2015 at 12:20 am and is filed under Development, Environmental History, Introduced and Invasive Plants, Research, Smallholder farming, Sustainability. You can follow any responses to this entry through the RSS 2.0 feed. You can leave a response, or trackback from your own site.