Farmer livelihood practices and the forest transition in Africa

In what situations do the practices of small-scale family farmers lead to increased tree cover, particularly on a continent better known for land degradation and deforestation?  Research on the “forest transition”, a pattern where net deforestation is replaced by a net gain in forest cover, has so far avoided much mention of Africa.  In contrast, it is historically documented in western Europe, eastern North America, east Asia, and seemingly underway in parts of Latin America and Southeast Asia.  This research tends to focus on factors such as economic modernisation, rural abandonment, urbanisation, or even globalisation as driving forces of the forest transition.  Two recent studies I contributed to focus instead on Africa – one in West Africa, one in Madagascar – and on transitions brought about by rural farmers. END_OF_DOCUMENT_TOKEN_TO_BE_REPLACED

The political ecology of ecosystem services

In just the span of a decade or two, it seems that nearly all environmental management writing (whether scientific reports, public awareness brochures, or policy briefs) has come to call on the notion of “ecosystem services” to defend the importance of healthy, functioning “natural” systems. What is this concept, where does it come from, what does it mean, and what doors does it open or close?

Is “ecosystem services” the ultimate win-win idea that translates abstract values of a healthy environment into policy-relevant and policy-actionable chunks? Does it allow ecologists and economists to speak the same language, leading to better outcomes for the environment and for the rural (often marginalised) people who manage it? Or is it a tool of the “neoliberalization” of nature, another means by which capitalism penetrates into new terrains, creating new forms of accumulation in the hands of a global elite, further marginalising the poor? Or is it all of this – and more – at the same time?

END_OF_DOCUMENT_TOKEN_TO_BE_REPLACED

Peatland deforestation for acacia in Indonesia

Oil palm gets all the attention, but what about acacia?  Oil palm has become synonymous with deforestation in Indonesia and resulting losses of orang-utan habitat, increased carbon emissions, and unhealthy smoke haze.  But equally large areas of peatland are being converted to pulp and paper plantations of tropical salwood wattles like Acacia crassicarpa and A. magnum, trees that now cover many millions of hectares in South East Asia.  In Riau province, Sumatra, the two big pulp mills (operated by Asia Pulp and Paper [APP] and Asia Pacific Resources International Ltd [APRIL]) have around 75 and 45 per cent (respectively) of their pulp plantations located on peatland. The ways in which such forestry concessions have been granted and implemented have inspired dramatic protests: 28 residents of the Meranti Islands in Riau Province stitched their lips shut while demonstrating in front of government buildings in Jakarta (Jakarta Post; Transparency Int.). END_OF_DOCUMENT_TOKEN_TO_BE_REPLACED

A space for interdisciplinarity

Recently, several geography programs I am familiar with – notably my own at Monash – have been in the throes of administrative reshuffling and identity crises.  In written submissions, hallway chats, and meeting room polemics we have all declared, at one point or another, that the strength of Geography is its interdisciplinarity, its crossing of bridges between the natural and the social, between science and arts.  We have also declared that the integrity of the discipline depends on it staying together as one, even though a climate modeller will have different needs than an analyst of urban indigenous social movements. END_OF_DOCUMENT_TOKEN_TO_BE_REPLACED

Is everything becoming a ‘Science’? Next up: geographical science, poverty reduction science…

Is everything becoming a ‘Science’ these days? Land change science, sustainability science, conservation science, invasion science… what is behind all these new labels? This phenomenon seems to have somewhat contradictory drivers: one is an appeal to interdisciplinarity and crossing the natural-social divide; the other is a rhetorical or strategic retreat to the authority of Science-with-a-capital-S. The consequence is a number of approaches claiming intellectual territory and scientific, ‘apolitical’ authority and largely shutting the doors for reflective, interpretive, and critical social science and humanities approaches. END_OF_DOCUMENT_TOKEN_TO_BE_REPLACED

Imagine two 9 year-old children.  One gets driven across town to a school that his parents find best fits his learning needs, or social values, or cultural community.  He barely knows the kids on the street where he lives, as they all go to other schools.  He sits in traffic everyday, contributing carbon to the atmosphere and pollutants to the city air.  The other child walks to the local primary school, joining friends along the way, kicking stones down the sidewalk, plucking leaves from the hedge, learning to avoid dangerous street crossings and engaging in little mischiefs.  Obviously, I exaggerate and simplify.  But the point I wish to make is that the impacts of school choice (or school vouchers, or proliferating private schools) on traffic, air quality, carbon emissions, health, family time, and neighbourhood cohesion are far from sufficiently discussed in debates over school choice.

END_OF_DOCUMENT_TOKEN_TO_BE_REPLACED

What happens when you combine human labour, introduced plants, and particular societal histories and structures in a certain tropical landscape?  You end up with anthropogenic or cultural landscapes – the “matrix” in current ecological jargon – such as the domesticated forests1 of southeast Asia, the tree gardens of Caribbean or Pacific islands, the shambas of Africa, the rice terraces of Madagascar.  Despite their aesthetic and cultural attractions, these smallholder farming landscapes are directly or implicitly critiqued by many – for not being as productive as modern industrial agriculture, for trapping people in rural poverty, and for taking up space at the expense of natural habitats.  In two recent papers with French collaborators, I argue instead that such landscapes can be sustainable sources of useful products, can facilitate vibrant and resilient rural communities, and can be resilient contributors to the functioning of local and global biophysical systems. 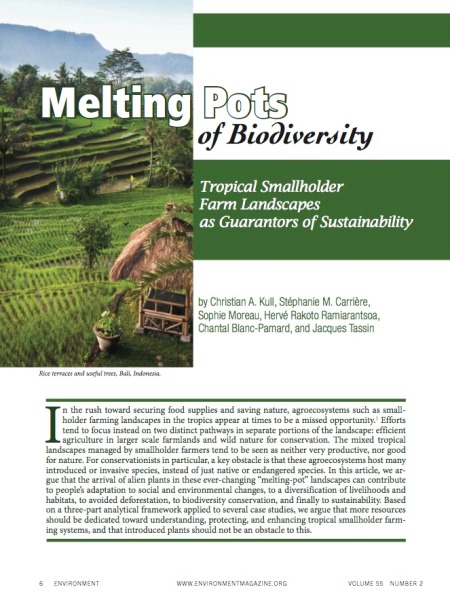 END_OF_DOCUMENT_TOKEN_TO_BE_REPLACED

Are Australian acacias planted overseas miracle plants for rural development, or are they the worst kind of environmental weeds?  The battle lines appear rather stark at times.  At least when one reads environmentalist Tim Low’s rebuttal to a critique that Jacques Tassin and I wrote of his views.  We thought our statement to be tempered and tried to build a reasonable case for responsible use of exotic agroforestry trees (see also previous blog).  But Low calls us “in denial about dangerous aid”, flogs a misplaced example about mesquite in an argument about acacia, all the time preaching his argument to the converted in the journal Biological Invasions.   END_OF_DOCUMENT_TOKEN_TO_BE_REPLACED